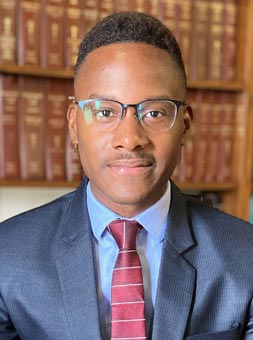 Jechonias S. James rejoined Dudley Rich LLP in September, 2020, as first-year Associate after having clerked at the firm during the summer of his second year of law school. He grew up on the island of St. Croix and has family ties throughout the U.S. Virgin Islands. Prior to attending law school, Jechonias served in the United States Navy as flight crew on the P-3 Orion, an integrated maritime surveillance aircraft. While on activity duty, he deployed to provide operational support to Commander Task Force units around the globe, and, upon separating active duty, served in the United States Navy Reserve in a similar capacity.

While in law school, Jechonias interned at the Cook County Public Defender’s Office, the Illinois Office of the State Appellate Defender, and City of Chicago Law Department where he honed his litigation and legal research and writing skills. He also participated in the Willem C. Vis Moot Court as a brief writer, and served as a Contracts Tutor, Faculty Research Assistant, and President of the Loyola Federal Bar Association. As a Dudley Rich law clerk, he assisted the firm in researching regulatory issues on banking, tax, and other commercial transactions. In his final year of law school, Jechonias worked at a private equity firm that specializes in litigation finance investments. There, he assisted with due diligence and the monetization of investments, and handled the drafting and documentation of financing transactions ranging from $1 million to $15 million.

Jechonias earned his J.D. from Loyola University Chicago School of Law with a Certificate in Tax Law. He earned his Bachelor of Arts in International Relations from Rollins College.

In his free time, Jechonias enjoys running, hiking, and swimming. He also enjoys volunteering and serves as an Assistant Coach for the St. Thomas/St. John Seventh-Day Adventist School in the Virgin Islands Bar Association Moot Court Competition. Jechonias looks forward to contributing to the Virgin Islands community in a meaningful way.